As I have previously mentioned I want to start work on some side projects this summer. Not only will it look good for my portfolio but also I just love making games! The majority of my time at University was spent building up key programming skills; it was rare that I was able to just make games that I want to make. Alas that time is over and now I have time to make what I want! 😀 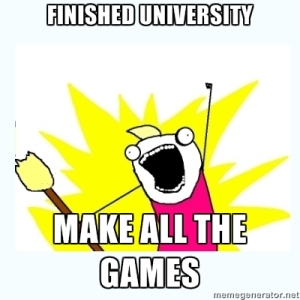 But which games? It’s easy to get carried away with loads of ideas (which I am guilty of in the past), which is why I have narrowed my them down a little. My first project that I will be doing is an old school point and click game. I have wanted to create this style of game ever since I played Monkey Island on my dad’s old Amiga system, (oh those were the days). The puzzles and humour of the Monkey Island series was what made my childhood and also gave me many life lessons.

My idea for the point and click game is much grittier and darker than the Monkey Island series. The idea is based around being a detective that has to solve a number of crimes around the city, a similar theme to the film Se7en, if you haven’t seen it, I’d recommend it! However I wanted to experiment with this idea in terms of the gameplay. I do not want to give too much away for now but I do have a couple of ideas for making the game a little bit unique.

It is a work in progress and needs some serious design work before I can begin prototyping it.  I shall leave it at that for now but will begin the designing process very soon and will post all about the development process throughout the creation of it and go into more detail about the game design and other aspects of the game. Ideally I will give an update at least once a week, but I will not limit it to that. Whenever I make progress with the game I will most likely want to share it with you! :).

But what about the other project ideas I hear you ask? I have a few more project ideas, Including a bigger project that I hope to do with a fellow programmer and artist, however I will talk about those in a future post.

Mrs Doubtfire can say hello better than I ever could, courtesy from the awesomeness that is Robin Williams.

I will always love that movie :D. Anyway as this is my first post I should give a quick background of what to expect from this blog. Having just finished my final year at the University of Derby from the course Computer Games Programming I am now freeee. However this was short lived as the realisation that I have finished education, FOR GOOD. On one hand it’s a great feeling and on the other its scary! This gif cannot summarise my feelings any better:

Now is the time to look for job openings, ideally at an amazing games studio working on AAA titles such as Uncharted 4 (Naughty Dog, I’m waiting by the phone). Jokes aside I’m currently updating my CV and looking into applying for jobs. While doing that I hope to start a couple of personal projects that I have lined up which will be fun :). I hope to give several updates on each projects so you can see what I’m doing and you can even give some feedback!

Talk to you soon guys and gals. 😀